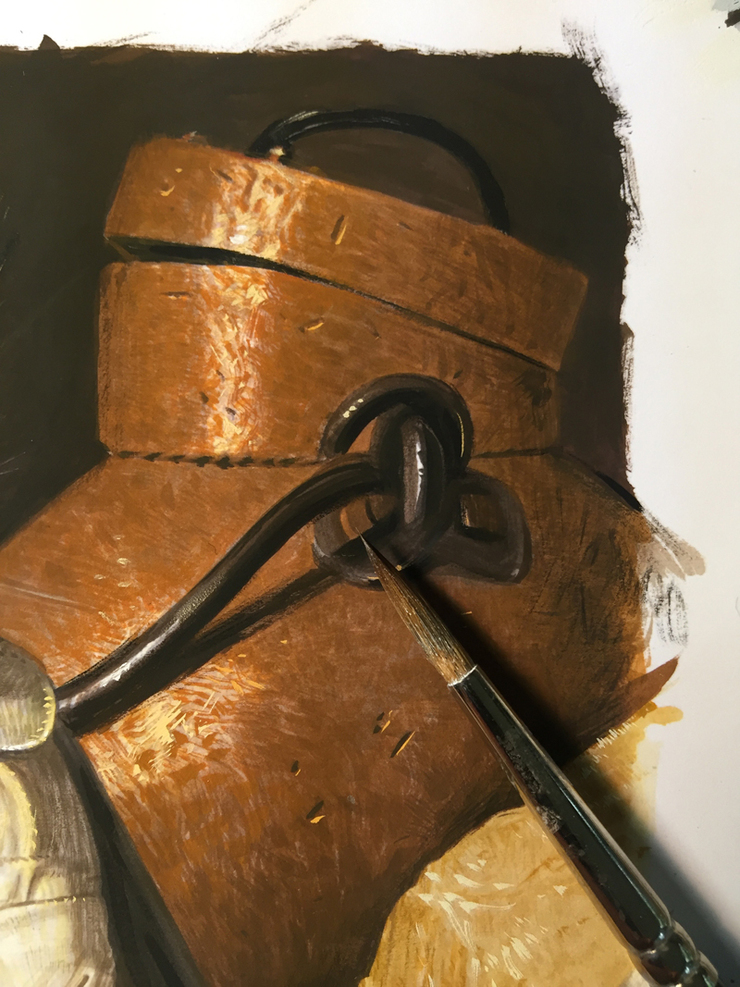 I had taken a break from the Gouache paintings, It took some gallery shows to put them back on my board.

Helikon Gallery in Denver, Colorado invited me to be in a show called "A Modern Baroque." I did a few new pieces just to see if there were some new directions that could come out of it. 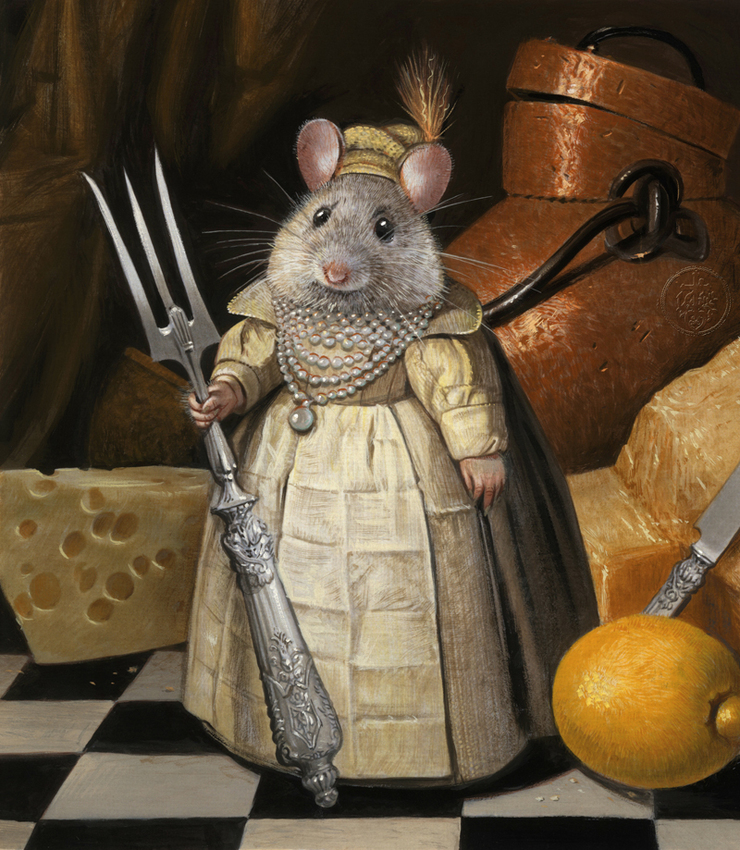 This first painting I called "Countess Camembert." Gouache on Paper.

Getting ready for the cheese ball... I wanted to close in tight like a royal portrait but of course the knife and kitchen elements would be giant in comparison to the tiny countess... 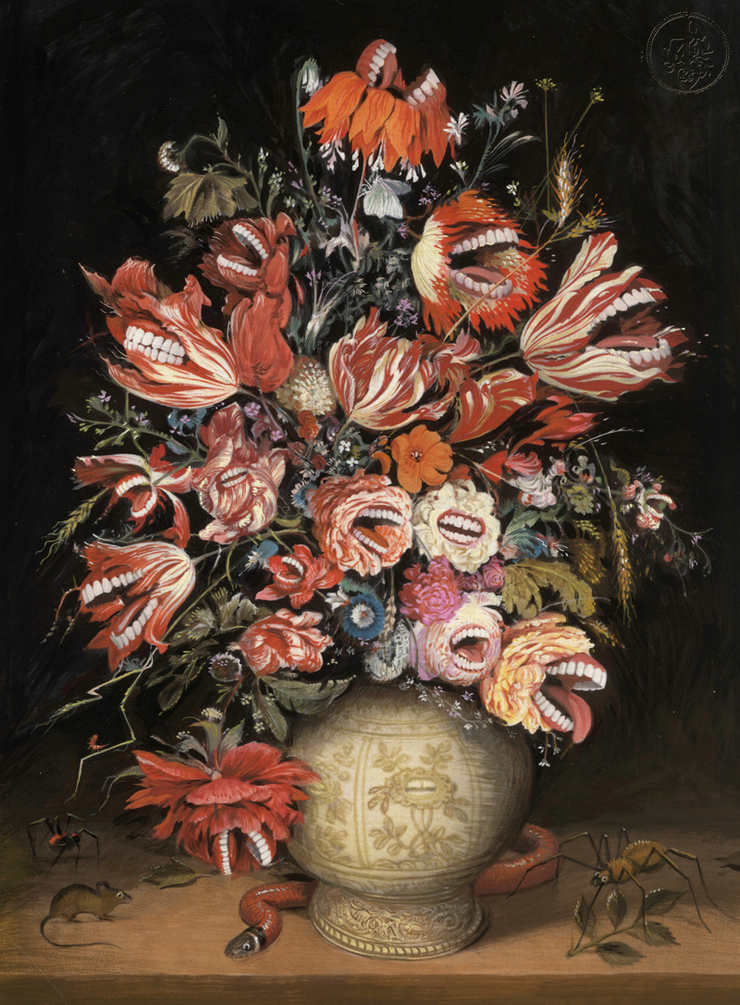 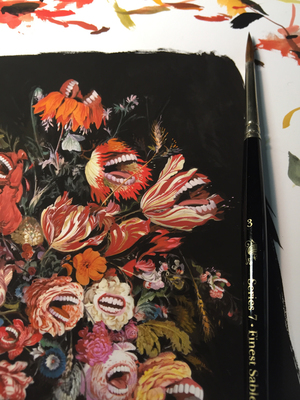 I thought this was a funny idea, and a silly painting. Fleurs qui mordent, (the flowers that bite) these little miniatures take so much time... I am so impatient. I guess that is why most of my compositions remain on the simple side. These complicated paintings take so much work; it's hard to stay with them. I have several started that I abandon because they're just taking too damn long to complete. This one was at least had a deadline for the show so it did get somewhat finished.

I went to a show a few years ago at the Morgan Library of the Book of Hours. They had so many wonderful miniatures in that show and magnifying glasses so you could marvel at the amount on care and detail those artists put into their work. I guess that might have been in some way the inspiration for starting to do these miniature paintings. For now they have been a great exorcize in working in this medium. Gouache is way more versatile than I had previously thought. 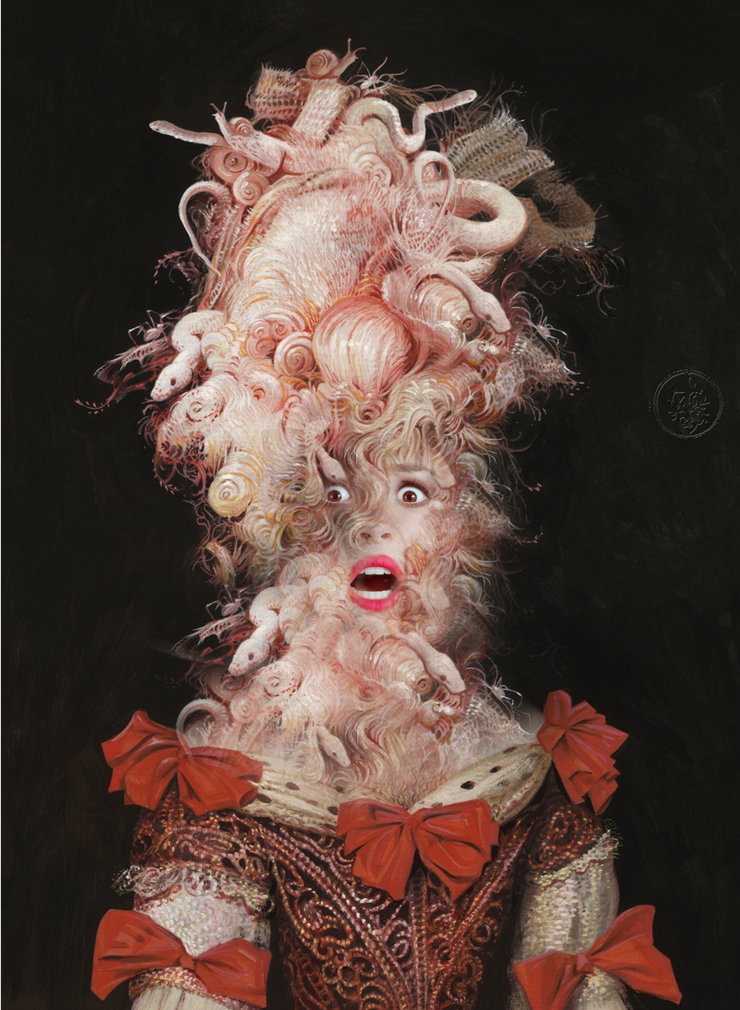 Also painted for the show at Helikon Gallery was this nightmare of a mess I originally painted as a man in a dress. When I showed it to folks there just thought it looked like Johnny Depp from The Pirates of the Caribbean movies. So I tried to salvage it by painting a new face that was just a silly horror movie screaming. Now it's titled “Bad Hair Day” 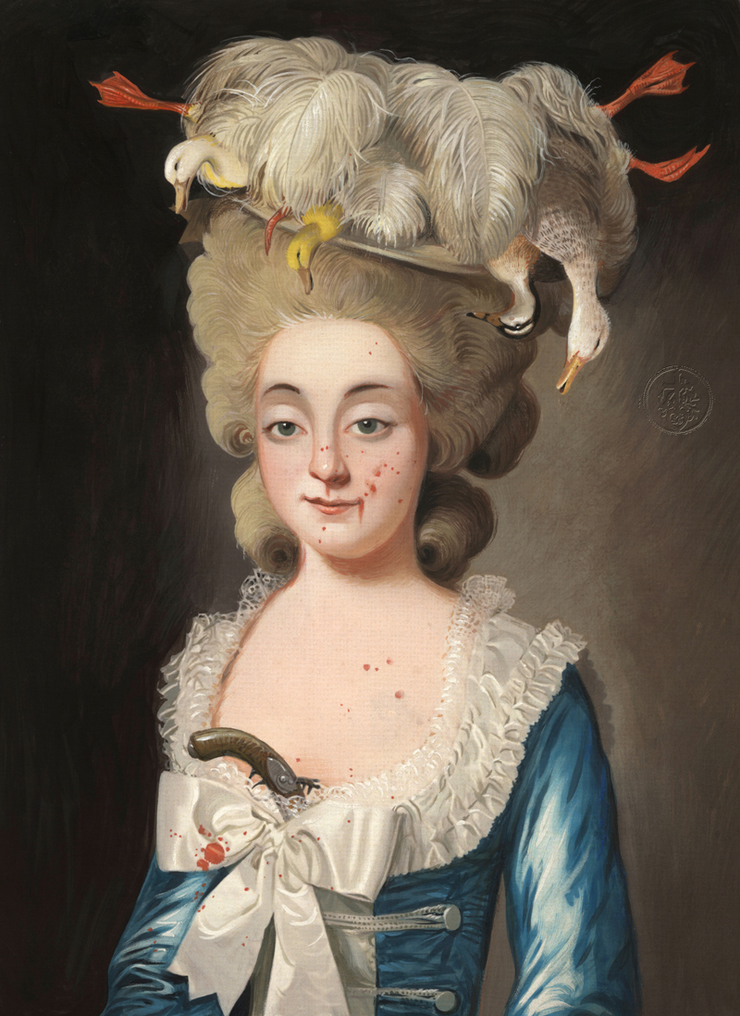 and this one I called "Mon Nouveau Chapeau Est Un Canard"...
I thought it would be a funny twist to have the feathery bonnet be made of freshly killed game. 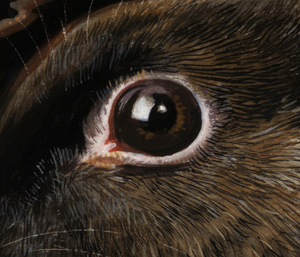 “Die Kleine Gräfin Hasenpfeffer” Another simple practice piece is this painting of a rabbit in a fur cap. I had tried several of these with the same idea in the past… Animals in fur, sort of simple, not as gruesome as the chicken eating fried eggs, but worth a giggle under my breath. Detail of the eye of the Rabbit you can see the hairs of the brush spread to delicate layers of fur. 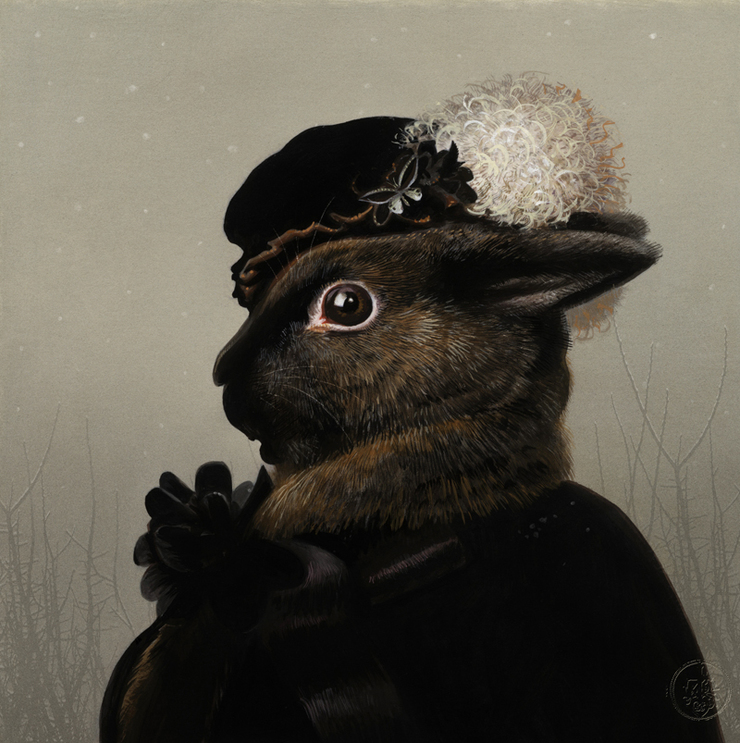 “Warrior Number 4 “. Continuing a series I had started a while ago. I like dressing up beasts in armor. They look like anything but warriors. 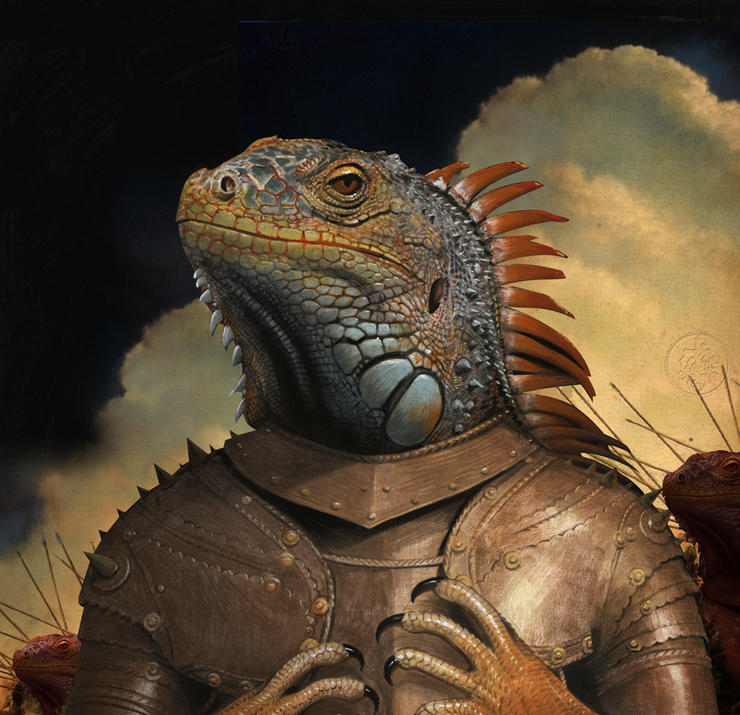 “The Kite” is a simple composition, just a little painting I did for Lee. She loves birds, She would probably have been an Ornithologist if bird people weren’t so very odd. I liked the simple quiet color palette and the serene feeling it leaned toward. I might try a few more of these at some point but something in me just wants to put a small clown hat on it’s head…. 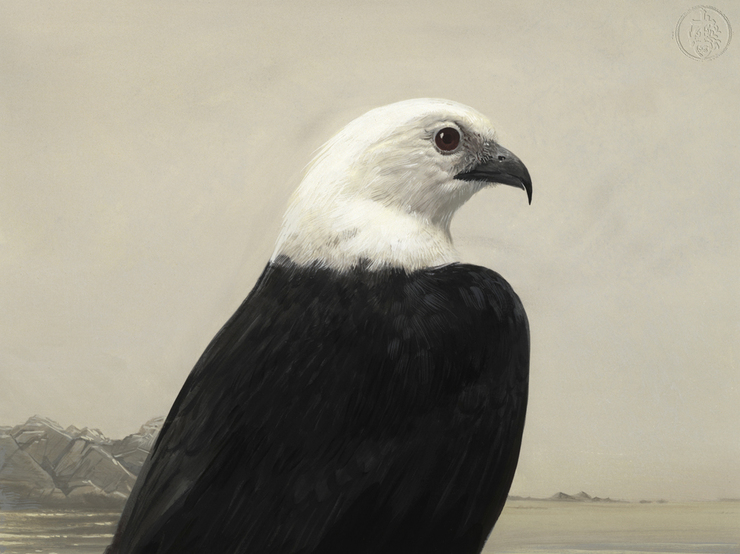 "Questioning Darwin" We just finished watching an HBO documentary called Questioning Darwin...it's a great insightful look into his research and following the evidence to the obvious conclusions... with interviews from creationists... who think it's nothing short of blasphemy.

My first thought was to do him made out of other animals. This really was just a second thought...kind of a half baked idea, but a great Documentary. 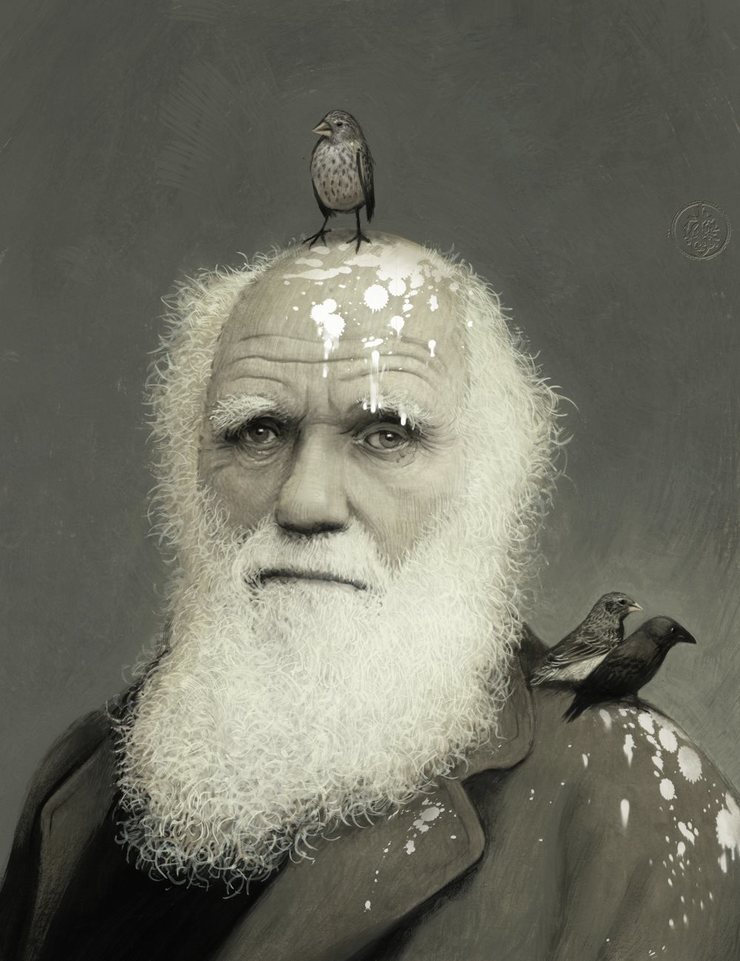 “The Offering” I was invited to create a piece for a new show at WOWXWOW, seemed like a great opportunity to come up with some new directions. This painting revisits subject matter I had previously used, but what I was trying to create was a somber mood and elements of surreality out of context to give the viewer a wordless story to connect to. 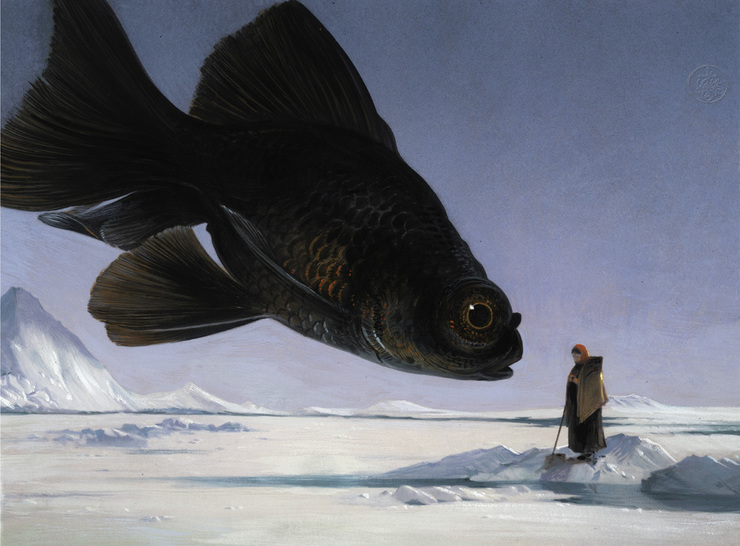 "La Fin Du Monde” is a great French Canadian beer, and the title of the painting. A concept that seemed to arise from the North Korean testing. To be so far away and unaware of remnant danger and political insanity was illustrated as a lady quietly reading her favorite book on the seashore. 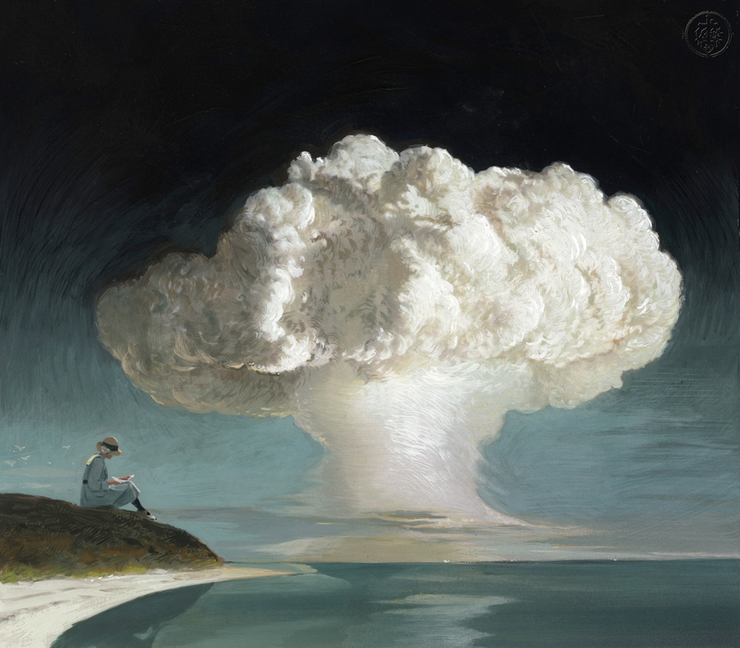 “The Black Sun” A few weeks ago we all took the day off and gathered with family and hundreds of complete strangers on top of Stone Mountain and watched the world go dark. It was strange and dreamlike, watching. When I came home I started this little painting of a strange dark character.. I gave it a slightly creepy undertone, a throw back to a series I had done a few years ago. I had some Gold leaf lying on my desk so I glued it into the ground and painted over it slightly with the gouache. It doesn’t show mush in the scan but in person it just glows eerily. 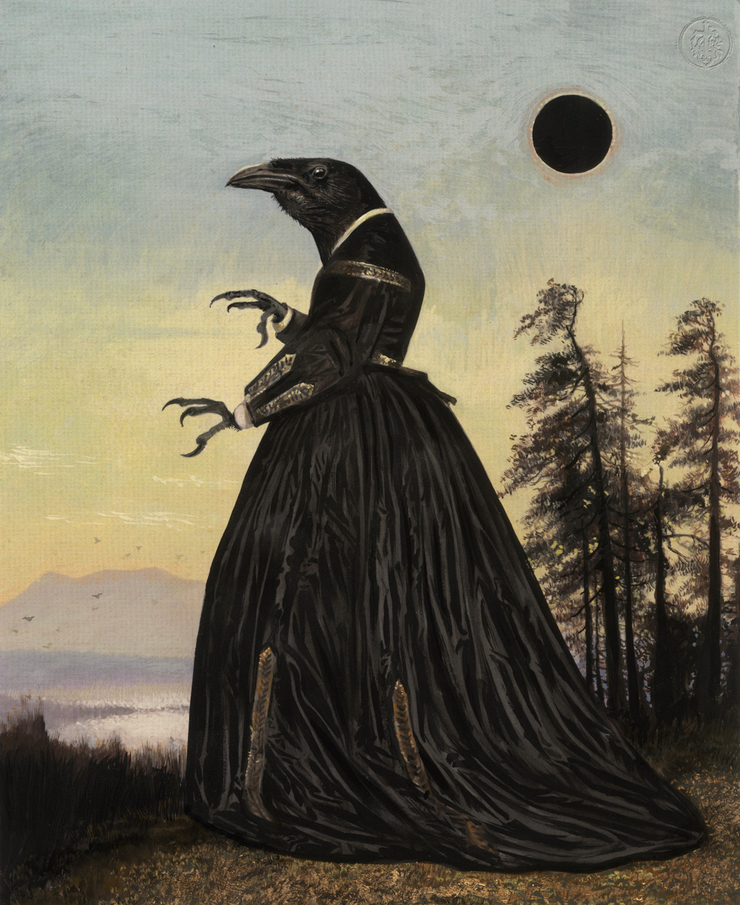