Last summer's CA Illustration Annual included 12 of my pictures from last year. It’s always great to be part of this “best of year” round-up, so my thanks to the editors of Communication Arts and to the jurors who voted for these pictures. The magazine gave us space to say a few words about each of the selections, but I thought I’d use this space to say a few more. 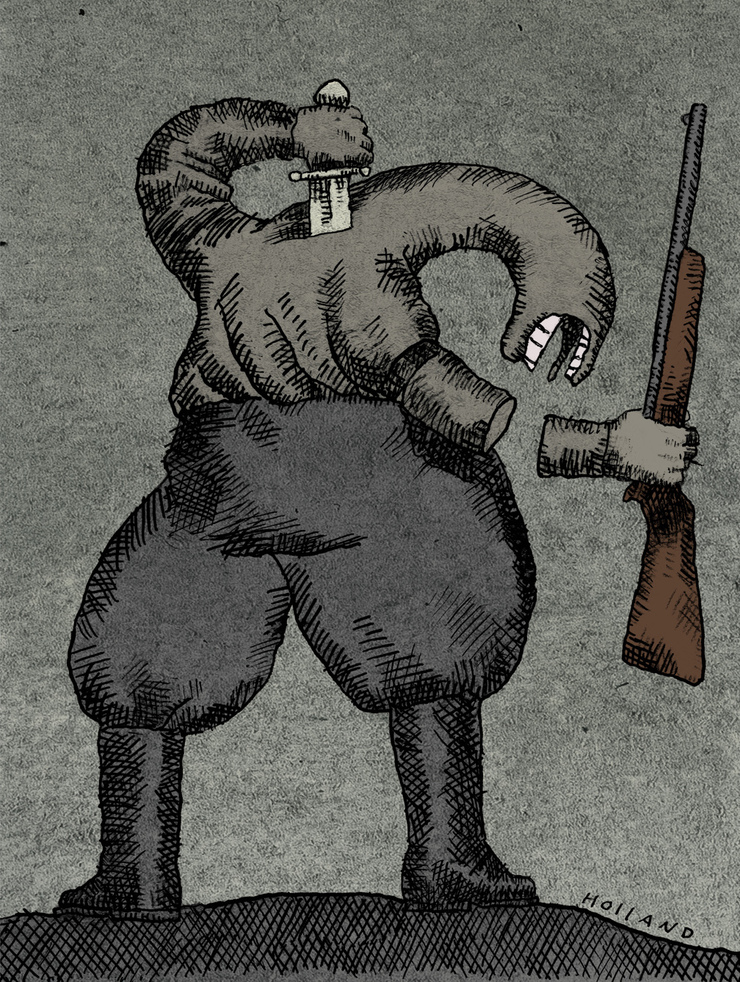 Three Drawings for The Baffler  For the previous several years, in each issue of The Baffler, Patrick Flynn published one of my drawings on the first page as a stand-alone image. Our working procedure was always simple. Every time the deadline for a new issue came around, Patrick would email me a few words about the issue's theme and a day or two later I'd send him several images to choose from – most came from a personal project I'm still working on. But if nothing from that group of images panned out, I'd send him a dozen or so sketches for the topic and do a new picture from whichever one he picked. It was an easy back-and-forth process. 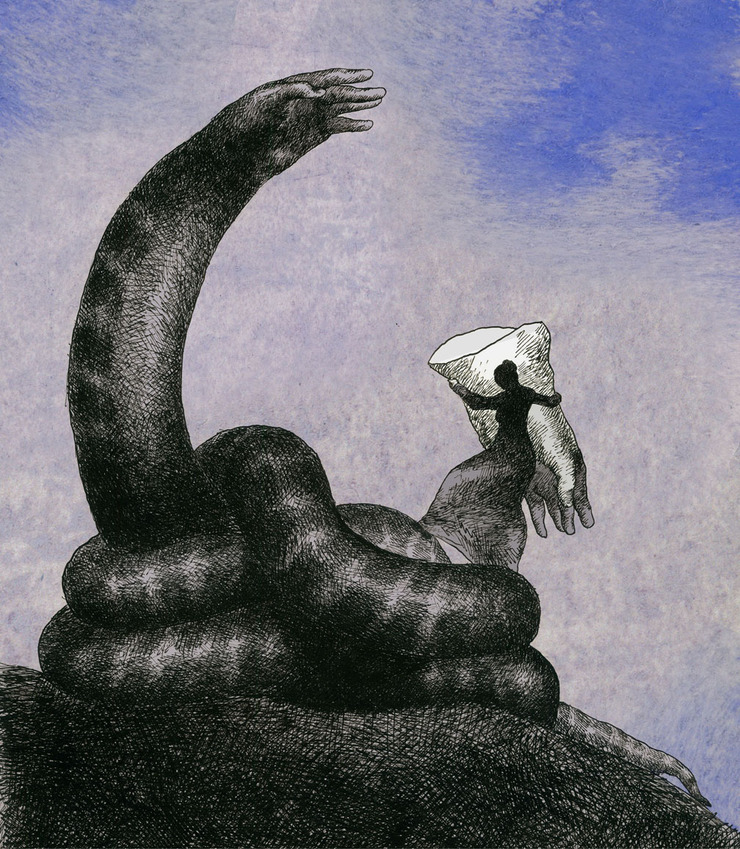 Patrick and I have worked together in various ways since his days as art director of The Progressive. His contributions there and at The Baffler have always been distinguished by his eclectic taste in style and his passionate advocacy of illustration as an art form. But he also believes as I do, that certain pictures can hold their own in a mass circulation publication even without a text. And this dedication to art as original content has made Patrick one of the most significant art directors in the development of contemporary graphic art. A lot of artists owe a lot to him and I certainly count myself as one of them. 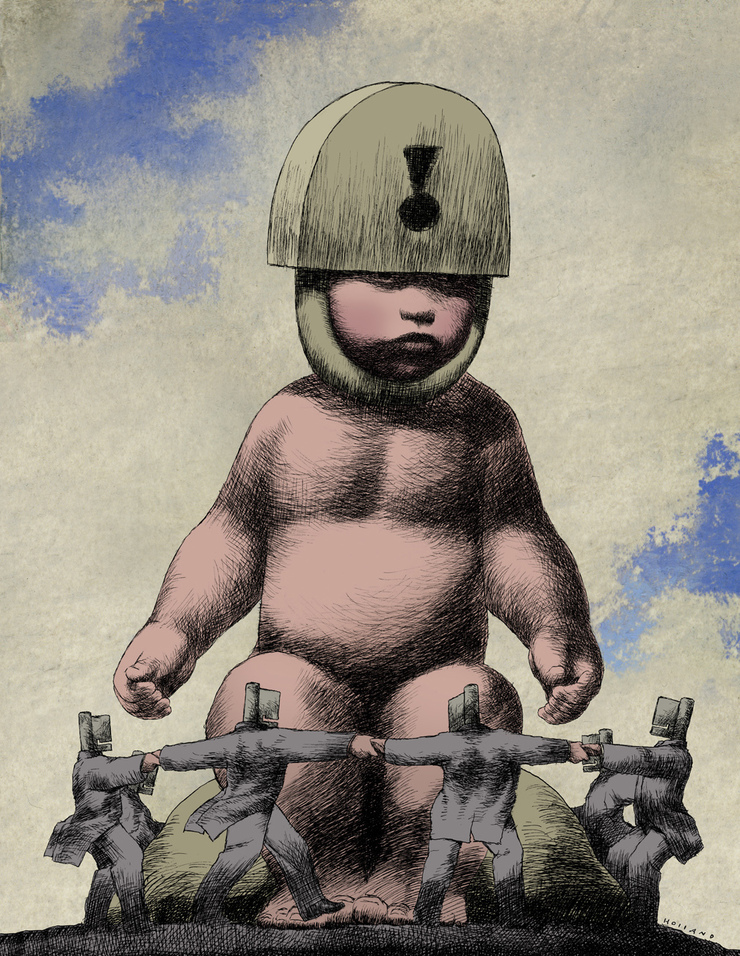 Three Posters for California State University Long Beach In 2015 the university invited me to speak to the illustration department as part of its Spring Lecture Series. To announce the event, they asked me for a picture they could use for a poster. 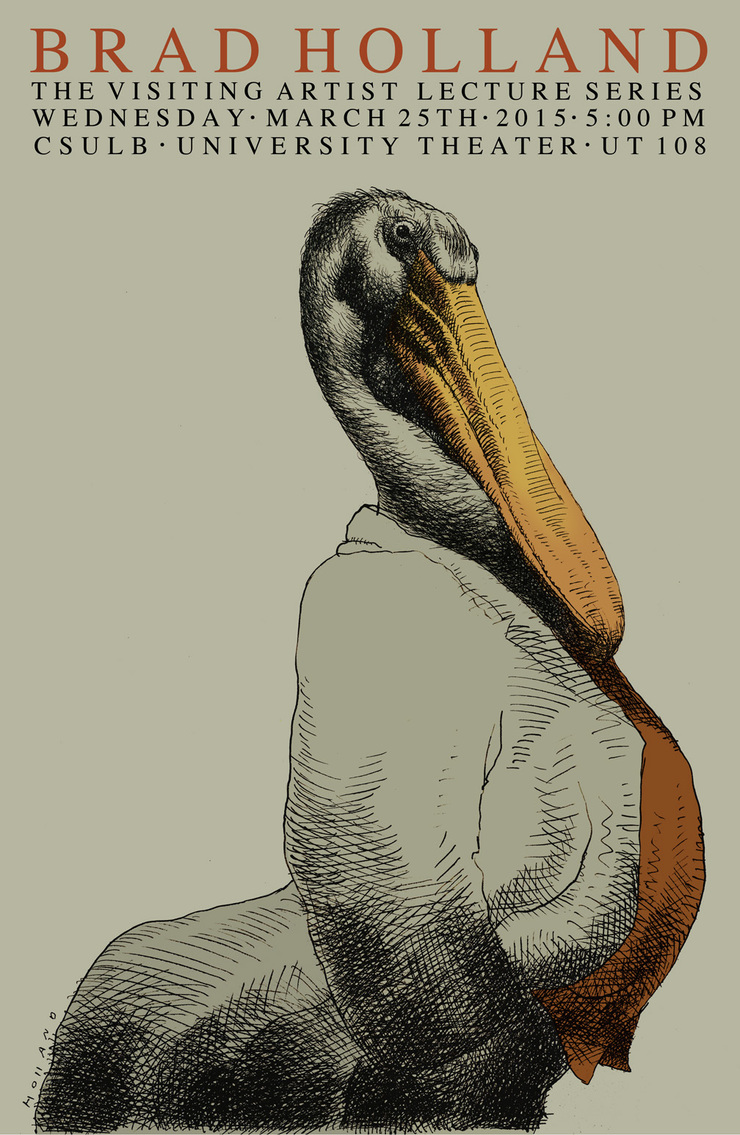 Before the digital era, the economics of offset lithography meant that even if you needed only a dozen or so copies of a poster like this, you had to assume (and pay for) a print run of at least one or two thousand. This required an event poster to be one of a kind.

But these days, most schools make these posters as digital prints, which means they don't have to print any more than they actually need to hang up around the campus. So with that kind of flexibility, instead of doing a single image poster I suggested we do three unique ones. 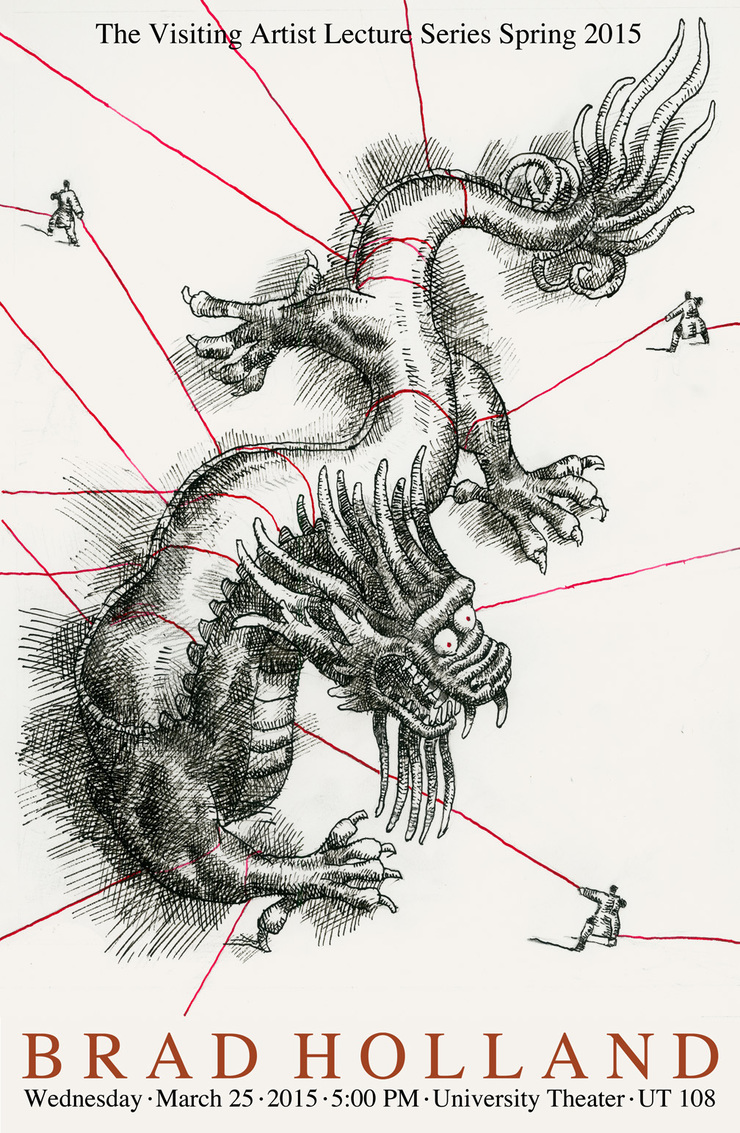 In the past, the large print overrun for lithographic posters always meant that the sponsors of a seance like this would give away or sell (usually at a modest price) excess posters to the people who attended. And that meant that your talk usually concluded with a poster signing and a long line of folks to meet and say hello to.

But now the lower cost of making on-demand prints has largely done away with all that. In most cases a few resourceful students will always manage to retrieve  the handful of posters from the walls and when you're finished speaking, they'll bring them to you, often somewhat furtively, for you to sign.

So here the economies of scale seem to work in reverse:

The institution saves money by not having to pay for hundreds of prints they would otherwise have to virtually give away. Yet the relative cost of making each digital print is sufficiently high that it would be an unnecessary gamble to invest in additional posters for a signing.

And so with that, the "nevermind" factor comes into play and another old tradition of our field fades away. Oh well! As the old Joni Mitchell song goes,"there's something lost and something gained in living every day." 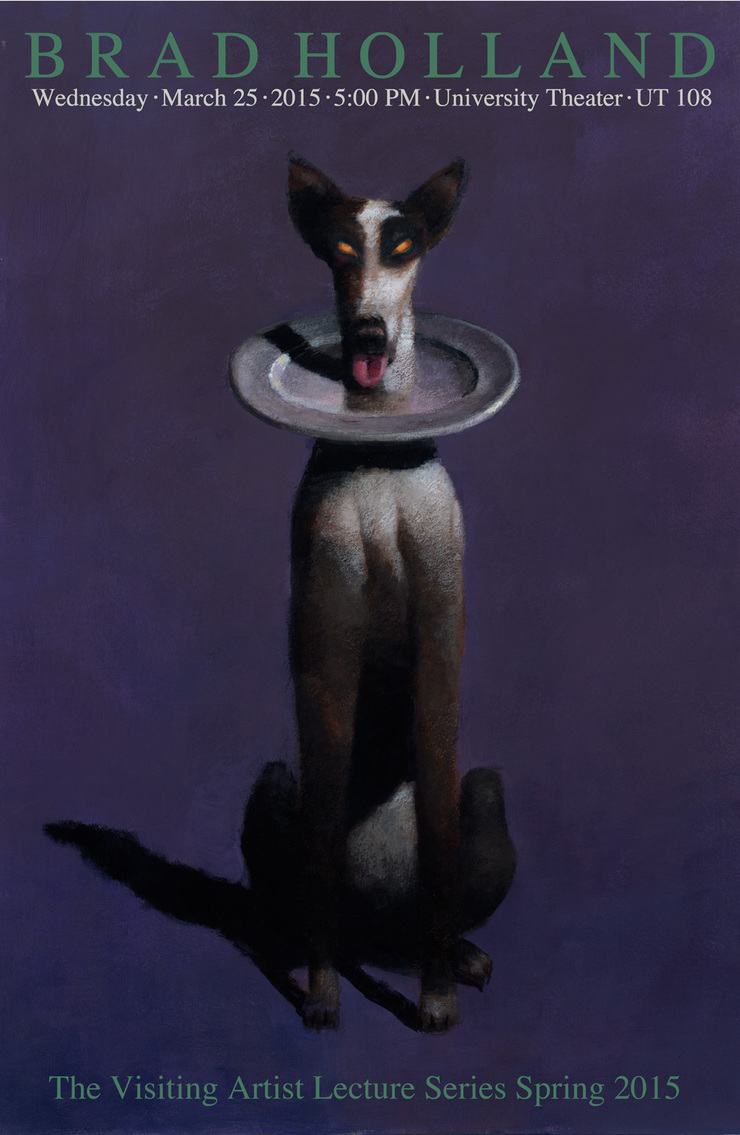 The striding figure below was done for ANAGO, 2015's production of the Sepapions Ensemble at the Odeon Theater in Vienna. In July of that year I snuck out of town long enough to go to Vienna to see the show.

The production is about a person whose life is frozen in ice. Driven by the desire for something more, he takes a walking stick and escapes. On his journey he experiences different situations in nature and in society until finally, he sees that the desire for life is not enough; you have to play a part in the events you live through.

The Serapions Ensemble that performs at the Odeon is quite an amazing group. The members are from all over. On my visit I met performers from Cuba, Romania, Russia, France, Argentina, Brazil, Colombia and Portugal. The theater is the old Austrian Grain Exchange, a grand old hall, bomb-damaged during the war and largely renovated, but still scarred in various places, as if to remind theater-goers of civilization's thin and often fragile veneer.

The productions are conceived and directed by Erwin Piplits, a magician of the theatrical arts who weaves together music, sound, lighting and dance, visual art and martial arts movements; and, in this case, animation projected against a giant background. The Serapions Ensemble has been creating performances like this for 27 years and it's been a great honor to have done posters for them for 25. At the moment I'm working on three more for productions to open in 2017. 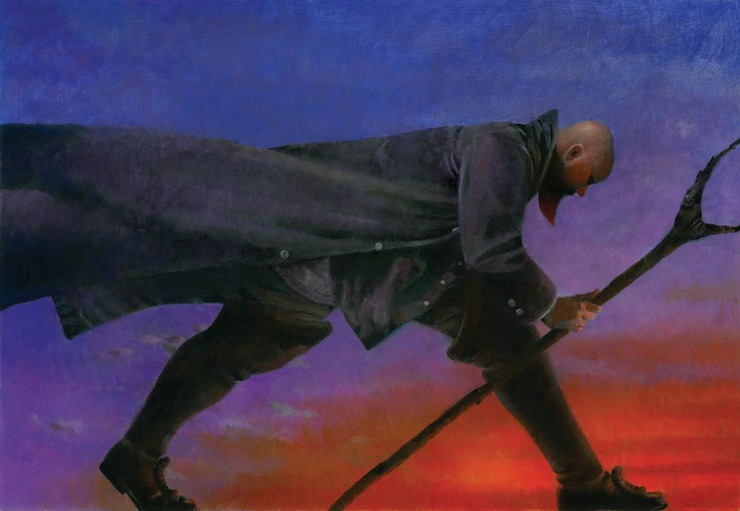 The Happy Prince is a project I wrote about here last Christmas Eve. I did the paintings during May of 2015 for a limited edition book published by the Nuages Gallery in Milan. There was an exhibition of my work there last summer and the originals, which are now owned by a collector in Venice, were on exhibition there, along with 35 other paintings, until the end of July. 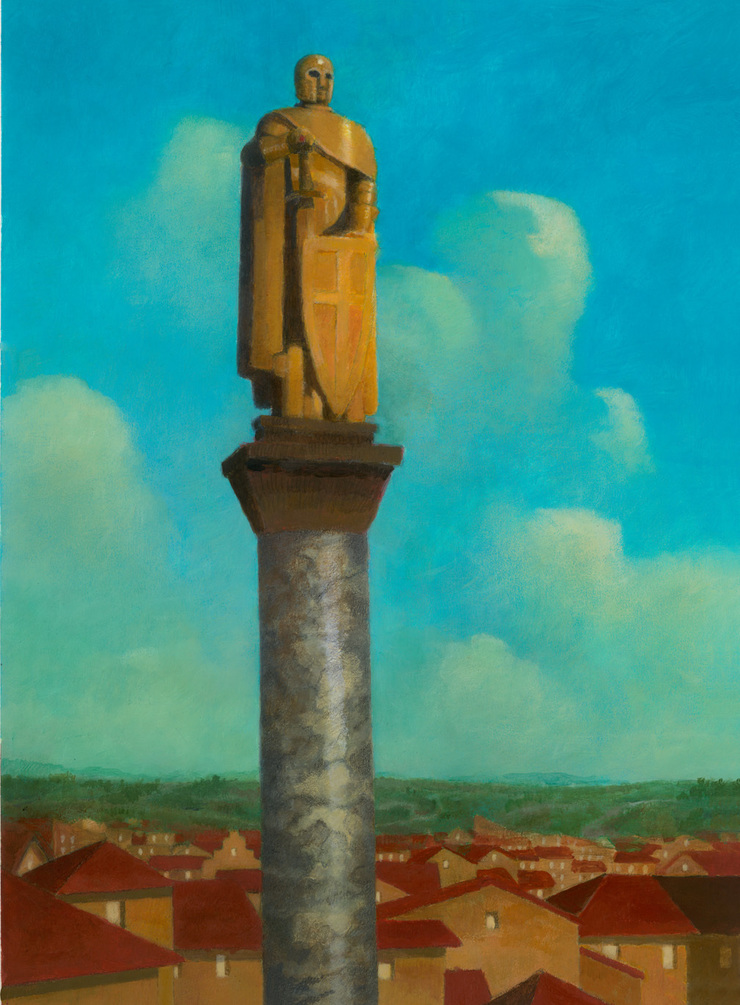 The Happy Prince has always been a special story for me because as a kid it was my favorite. My grandmother used to read it to me nearly every time I'd visit her big house on State Street, and it was by listening to it and memorizing the words as I followed along that I learned how to read. In fact, the first words I could ever recognize in print were "swallow, swallow, little swallow." 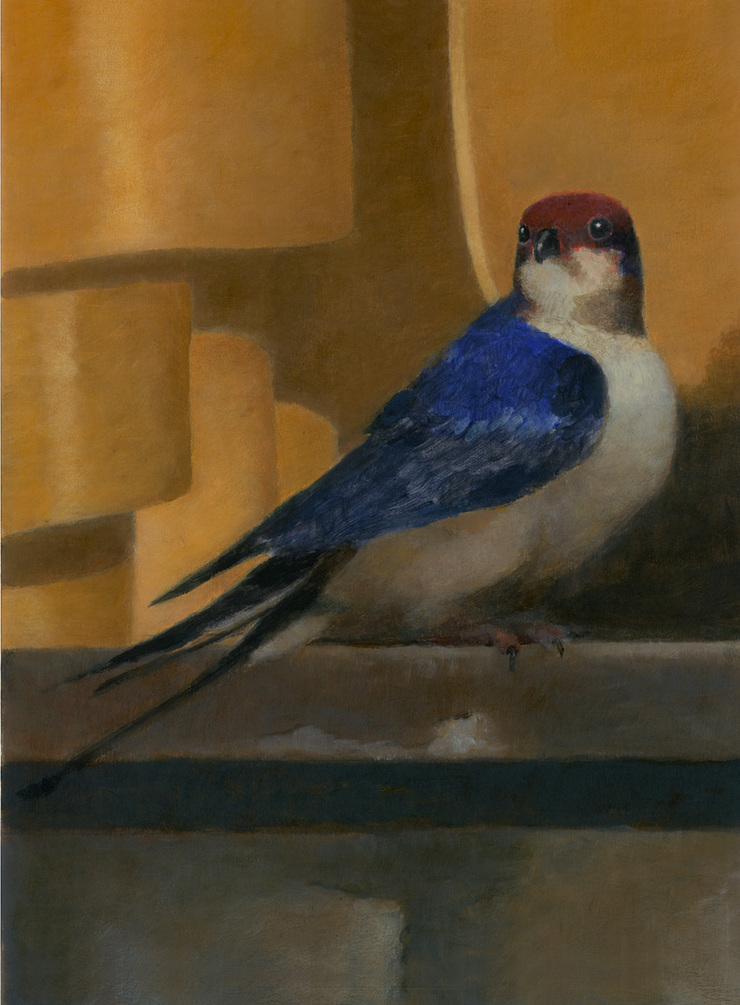 As the Nuages edition makes clear, The Happy Prince is not just a children's story, but a powerful, timeless fable. The Archbishop of Canterbury, who wrote the preface for our edition, put it this way:

"Wilde's beautiful story raises some of the deepest moral and spiritual questions we could imagine: what does beauty serve? How is it that the brokenness of one heart can heal another? How does transcendent and unconditional love appear in the world of change and limit?" 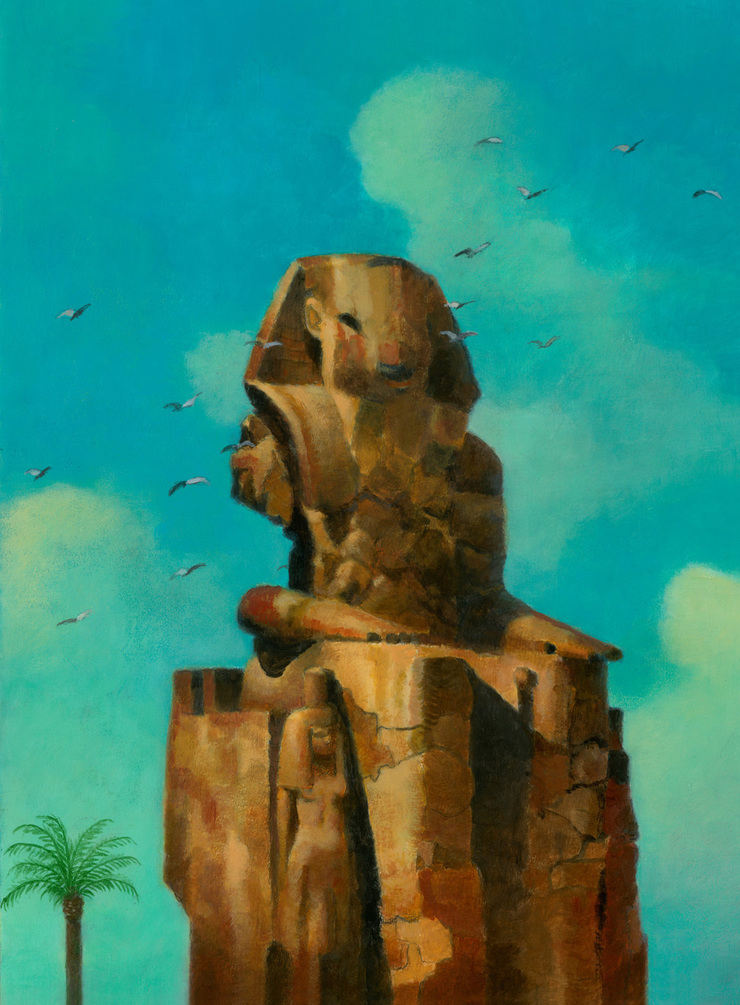 Before starting my own pictures I went online to see what previous artists had done with the story.

Usually, illustrators have tended to make the prince look rather benign, or in some cases, even sappy: a cute little good boy with curly hair and a tiny crown, while the bird in the story often looks like he's just flown in from Snow White and the Seven Dwarfs.

There's nothing wrong with that of course: there's lots of room in the world for different interpretations. But I wanted this version to convey some of the strength that I felt from The Happy Prince, even as a kid. And I'd like to think I produced a version that Oscar Wilde would have recognized as a suitable match for his story. 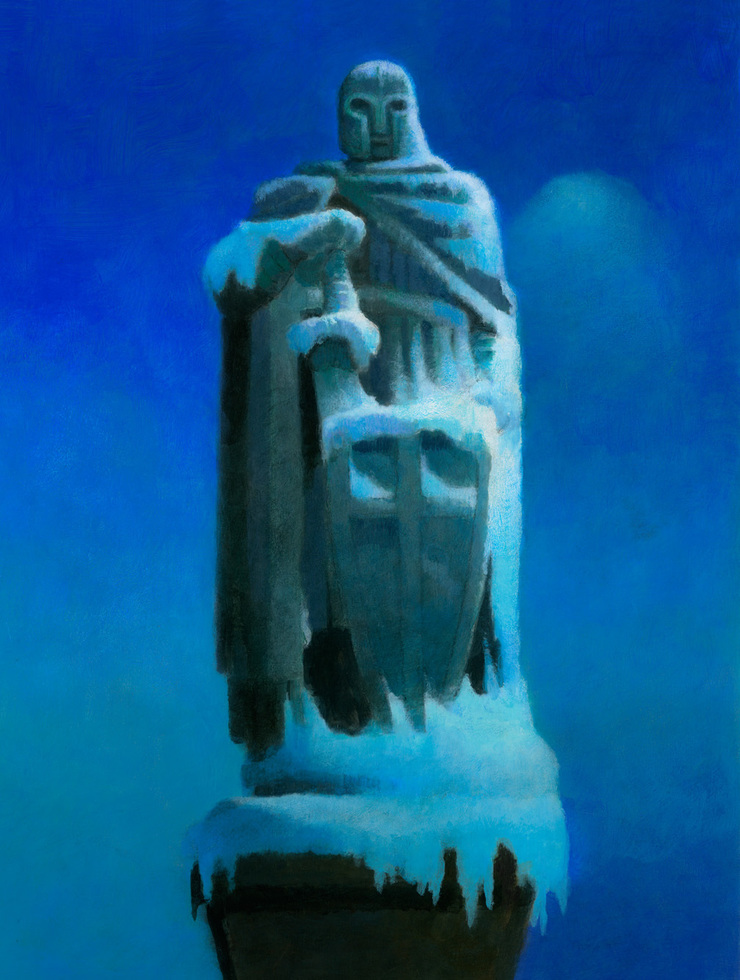 In doing the paintings I had two main challenges. First, I had a very short deadline: five weeks to do 12 paintings, with the first week lost to speaking commitments on the west coast. That left me only four weeks, or roughly speaking, only two and a half days apiece to conceive, sketch and execute each painting.

The second problem is that the main character is a statue, which means he never moves. Usually in a story, the main characters act: they do things that give the pictures variety. Here I realized that I'd have to replace action with variations in viewpoint, mood, atmosphere and lighting. That led me to think of Monet's haystacks, and I concluded that it would be a workable approach. 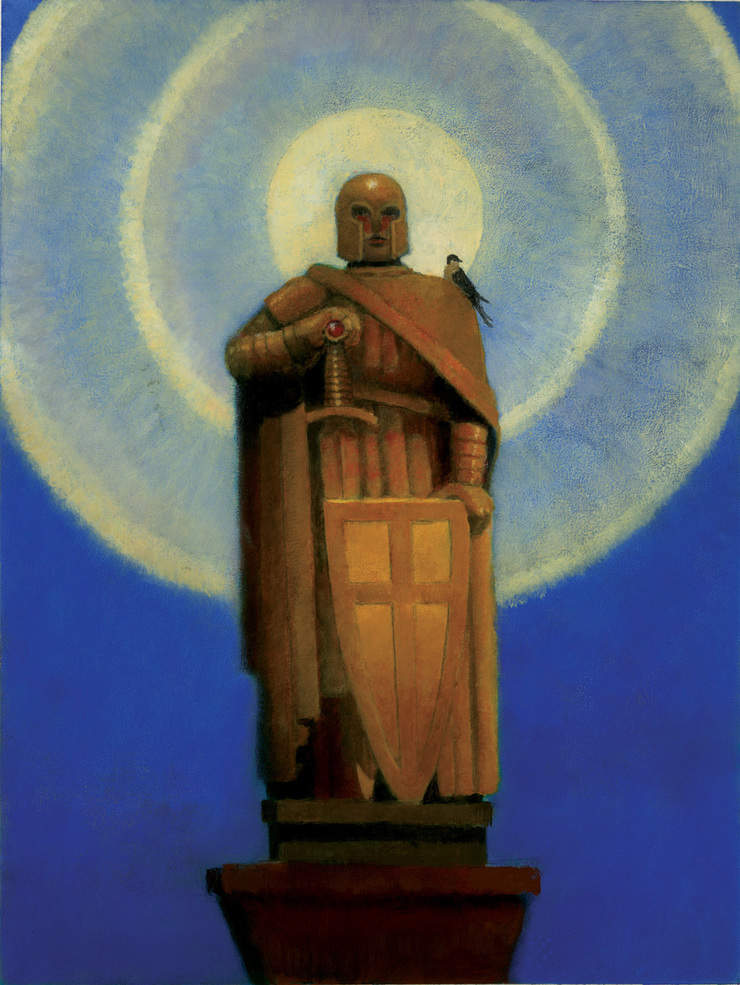 The paintings for The Happy Prince were first shown in London at an exhibition entitled Beauty and Sorrow: The Broken Heart of a Happy Prince. It was a production of the London Encounter.

Apparently the idea of producing a new version of Wilde's classic was a last minute decision. In April of 2015, Daniele Sacco in London contacted his colleague Cristina Taverna at the Nuages Gallery in Milan and asked her if she could produce an edition on short notice. Cristina immediately emailed me. Later she told me that she expected me to decline because of the ridiculous deadline. She apparently didn't know that I had always wanted to do pictures for the story. So she says she was completely surprised when I said yes.

The London exhibit was, of course, a show about the life and work of Oscar Wilde; and the paintings were included in a special section of the 28 page catalog, along with some comments about them that I was asked to write.

After that, the launch of the Nuages edition was posponed until May of this year in order to combine it with the exhibition of my other paintings. As a limited edition book, it's available through the gallery, but will not be sold in book stores.

The 2016 CA Illustration Annual is available from Communication Arts: http://www.commarts.com/gallery/illustration/all/all/2016