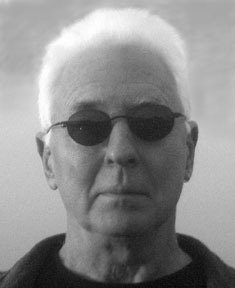 John H Howard was born in London and attended the Camberwell School of Art noted for its rigorous adherance to objective realism and strict formal academic tradition.  Studying under the then maverick painters, Uglow, Auerbach and Kitaj he graduated with a BA in Fine Art (painting, printmaking and art history).  After a three year stint at the British Museum he taught at several secondary schools before leaving to work part time at Camberwell and Guildford Arts Schools. He first visited New York in 1968 and showed paintings from that extended trip at the South London Art Gallery the same year.  During the 70’s he joined the prestigious artist’s Co-op at St. Katherine’s Dock run by Bridget Riley and Peter Sedgley and later moved on to the studios at Stepney Green. During this period he traveled and showed extensively in Europe residing briefly in Amsterdam and Berlin. A successful show at the Belgis-Friedel Gallery in New York City prompted a move to the United States and with the help of the painter, designer, and illustrator Roy Carruthers and the use of his studio at the Chelsea Hotel, a parallel career in illustration was developed. Initially, editorial, it rapidly expanded to encompass major design, advertising and corporate clients.In this field John has been the recipient of manyawards including six silver , one bronze and in 2002  a gold medal from the New York Society of Illustrators. His work is in the permanent collections of the Smithsonian, the Library of Congresss and the MTA, In 1997 he was the invited guest of honor at the Montreal “Hommage A Lumiere” and in 1998 he showed and discussed 50 years of work at the Society of Illustrators guest Lecture Series.  In 2000, his paintings were chosen by the Albright-Knox Museum for a travelling show of works on paper and in 2002 “The Relevance and Use of Sketchbooks” in  conjunction with a show at Kim Foster Gallery.  He was guest lecturer at RIT Illustration department in 2002 and most recently at Parsons. He is working on the third in a series of Illustrated books and had a show of scultpure at the Kim Foster Gallery in November 2012. John also completed paintings for the National Labor Foundation 2013 calendar and a poster for “Black History Month 2014 ” and 34 ft. mural in Long Beach, N.Y.. He has been a member of the faculty of Pratt Institute and Parson’s School of Art.

In 2013 he was awarded grants from the New York Foundation of the Arts (NYFA) and from the Pollack-Krasner Foundtion.