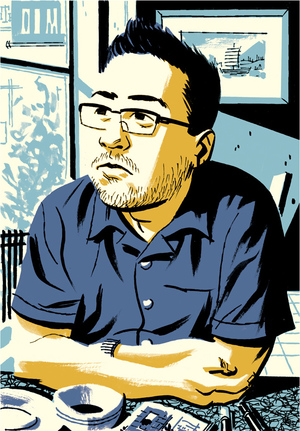 Born in Seoul, South Korea, Michael Cho immigrated to Canada at the tender age of 6 years old. There, he continued his lifelong practice of drawing on whatever surface he could find.  A graduate of the Ontario College of Art and Design, Michael now divides his time between freelancing on illustration assignments and drawing comics (preferably ones he writes himself). He's been the recipient of a couple of Canadian National Magazine Award nominations, finally winning a Silver in 2007. Shockingly for a freelancer and comic-geek, Michael does not own any expensive designer toys.  He currently lives and works in Toronto, Ontario, in a nice house with his lovely wife and their 2 kids.

Michael has published a book of his drawings of Toronto, Back Alleys and Urban Landscapes, through Drawn and Quarterly.  His debut graphic novel, Shoplifter, was published by Pantheon books in the fall of 2014 and debuted on the New York Times BestSeller List.

Michael is represented by Gerald and Cullen Rapp.