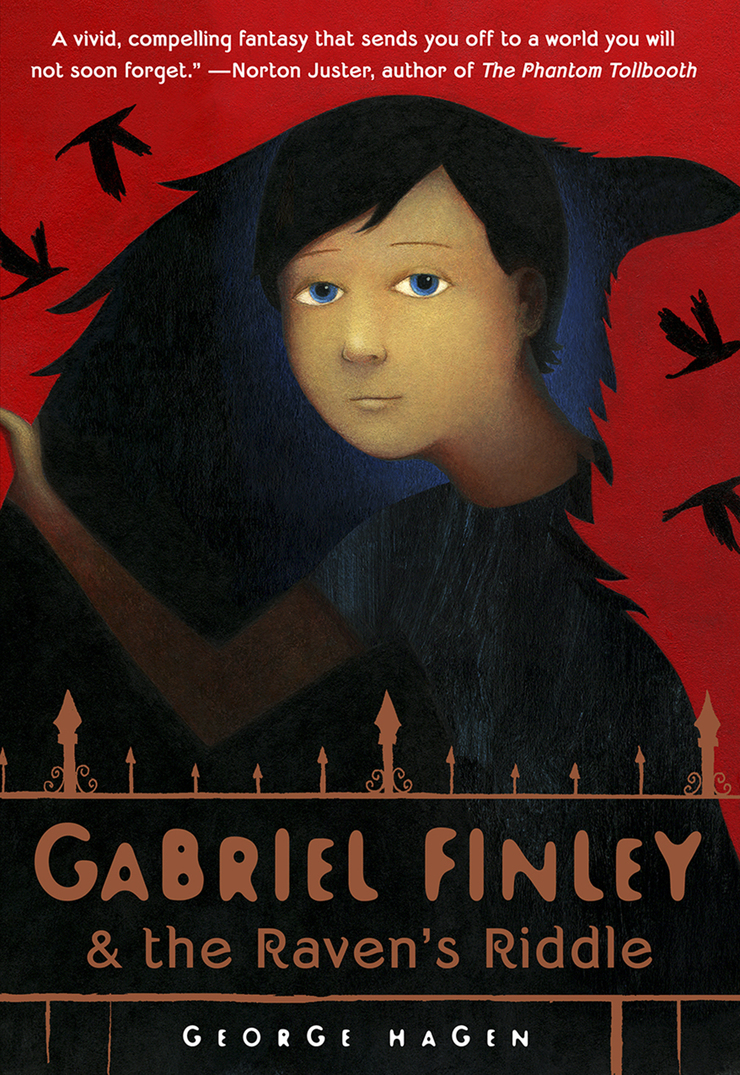 It’s been nearly two years since this project started and finally, I am honored to post my cover for the young adult book Gabriel Finley & The Raven’s Riddle from Schwartz & Wade Books! I worked with the amazing art director, Rachael Cole.

From my first read while it was still being edited, I thought this was a very special book. I ended up reading it many times. In part, for the job but also the final work for pleasure. The publishers seemed to have thought this book was something special as well as you’ll see.

It was a lengthy project for a variety of reasons. Originally, I was commissioned just to do the cover but then good news came that the publishers wanted to add chapter openers and other neat little bits to the book, dust jacket and end papers. Below are photos and notes about the project. 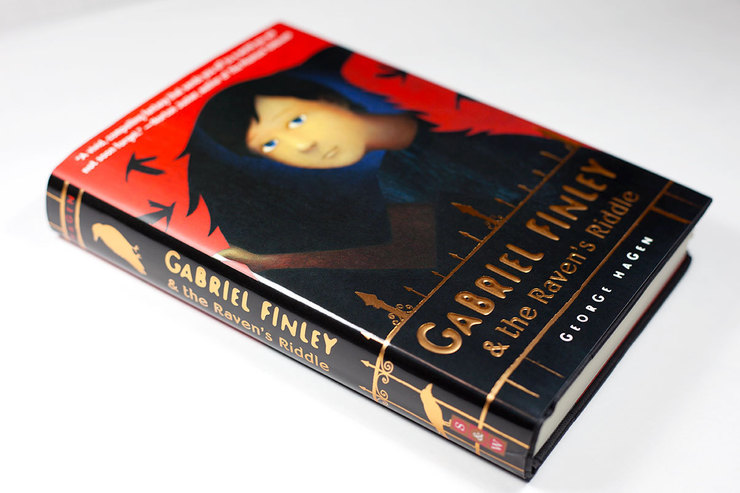 During the process of making the cover, it was decided that there would be a spot UV coating added in the cut out portion of the raven. You can see a little bit of the gloss on the edge of the spine compared to the matte part. 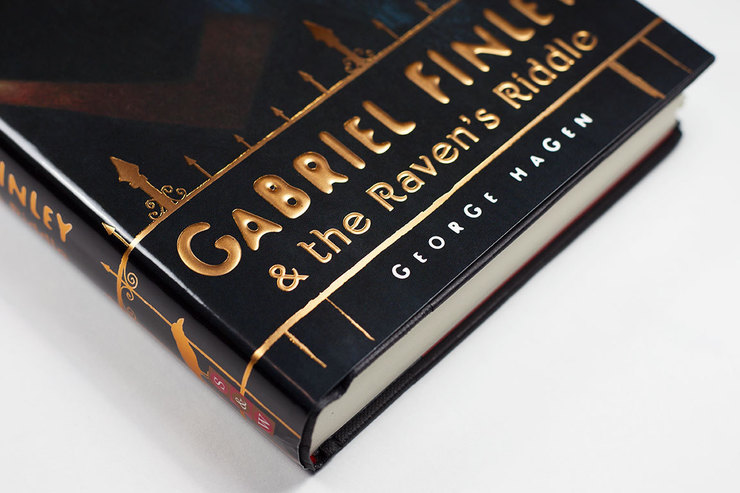 Copper foil color as well as embossing was added to the dust jacket to give it a nice tactile feeling and luxurious look. As many in the business know, the 4 color process can be expensive as it is but with a custom color like the copper ink, each jacket had to be run through the press an additional time specifically for that color. It really makes this book special. 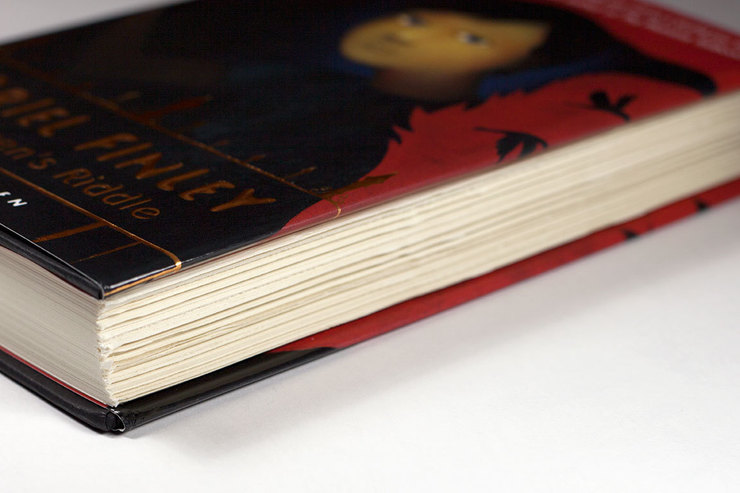 An added feature of the book is a deckled edge which up until the 19th century, it was pretty standard to find on most books. The process of paper-making made this unavoidable until technology caught up. It adds a nice ‘classic’ feel to the book. 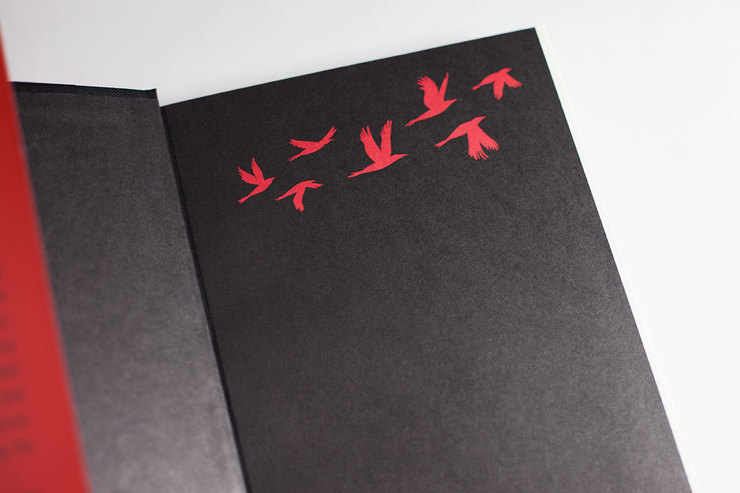 Illustrating not only the cover, but as the project progressed, we discussed the idea of adding images to the end-papers as well as little other bits and pieces throughout the book. On the cover and spine, the additional gate image and ravens were drawn for the book. 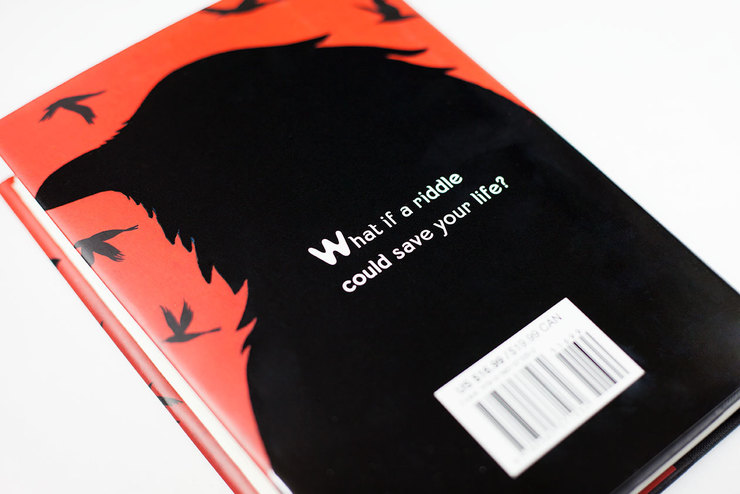 One of my favorite parts of the project was illustrating the section openers for the book. I enjoy the challenge of reading through the sections and finding that one image that can be an anchor for it but not give it all away.

While I love all of these, my favorite is the Part 3 opener. In part, it was the hardest to agree on but it is also, a very powerful image. I estimate at least 20 or more separate sketches were drawn and discussed with the team to get the ominous quality just right. I think we finally landed on the perfect image. 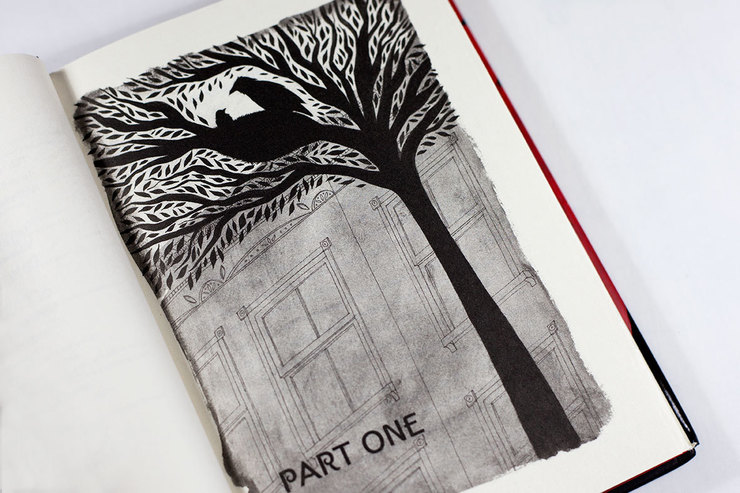 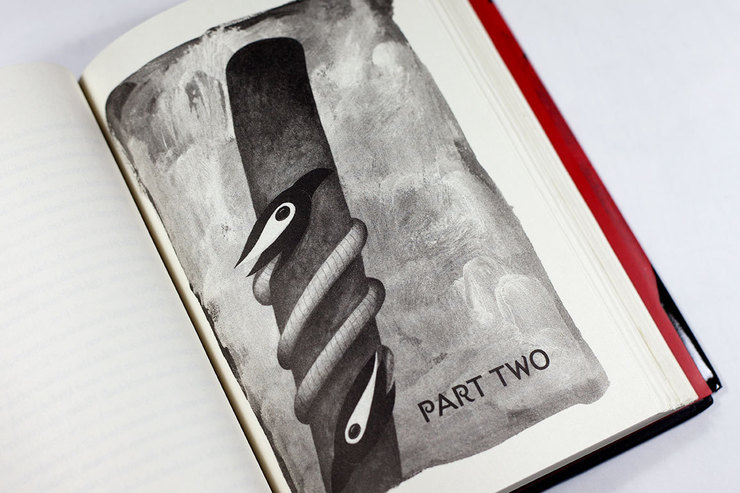 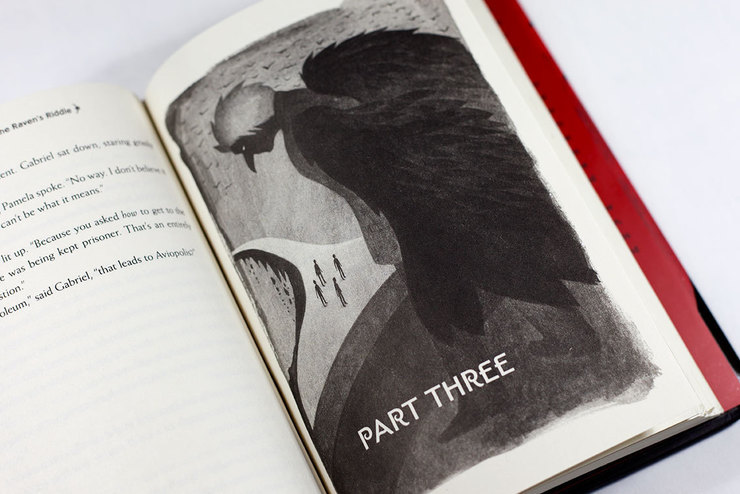 The process in creating the art for the book was fairly simple and usual…until new thoughts and ideas of what the book could be started being realized.

As I indicated earlier, I was originally commissioned to create only the cover. Below are the original rough ideas I sent in to Rachael after my first reads of the manuscript. Usually, there may be several rounds of these thumbnails done to get to feel and idea for the cover before refining the sketch.

As you can see, this part turned out incredibly easy and fast. The first sketch idea I presented in the top row was selected immediately as the cover. Not to give too much away of the story, I liked the idea of an image of Gabriel coming out of the mausoleum which is an important portal in the book. Instead of using a classic doorway, I felt that the shape of a raven would be perfect – both in image and in concept. I wanted the connection between Gabriel and the raven is represented and felt that having their heads aligned as well helped this concept. Reading the book, you’ll understand why this is important. 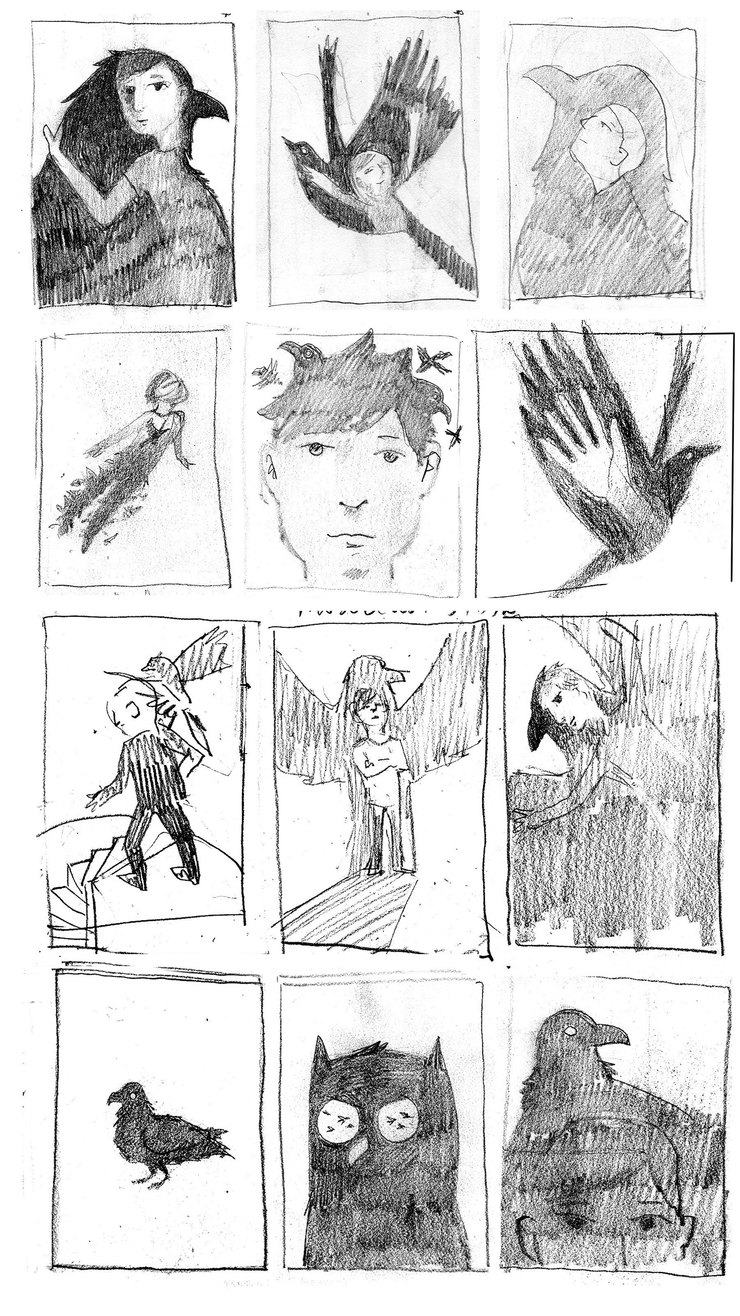 After the thumbnail was selected, I refined the sketch more and more, tightening the lines in order to solidify the composition and what Gabriel and the rave will actually look like. I included a color study to give Rachael an idea of the palette and mood I was thinking about. 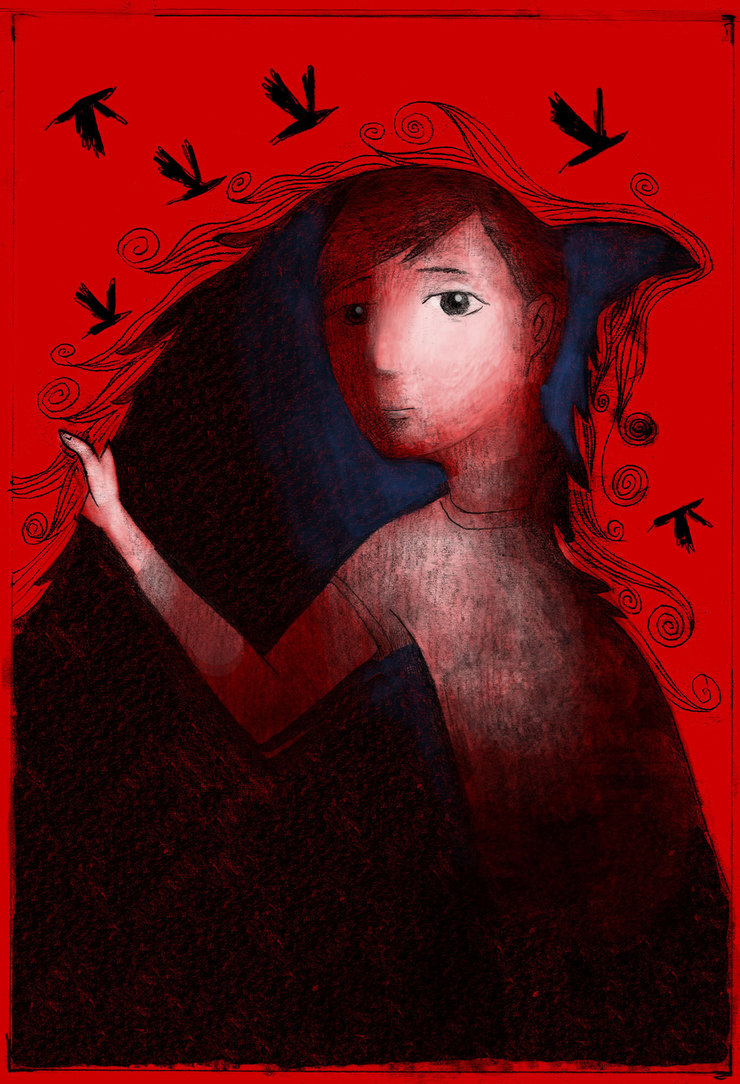 The image below is the original painting created for the cover. With some minor adjustments to Gabriel, they went to create a proof of what the cover could look like. I had already made some separate drawings of ravens and the gate which you can see in the proof just below.

It was decided at this point, only working on the project for a couple of months, that it would be put on hold to be released the following year. These sorts of things happen in publishing so I wasn’t concerned. We would get back in touch when things started rolling again. 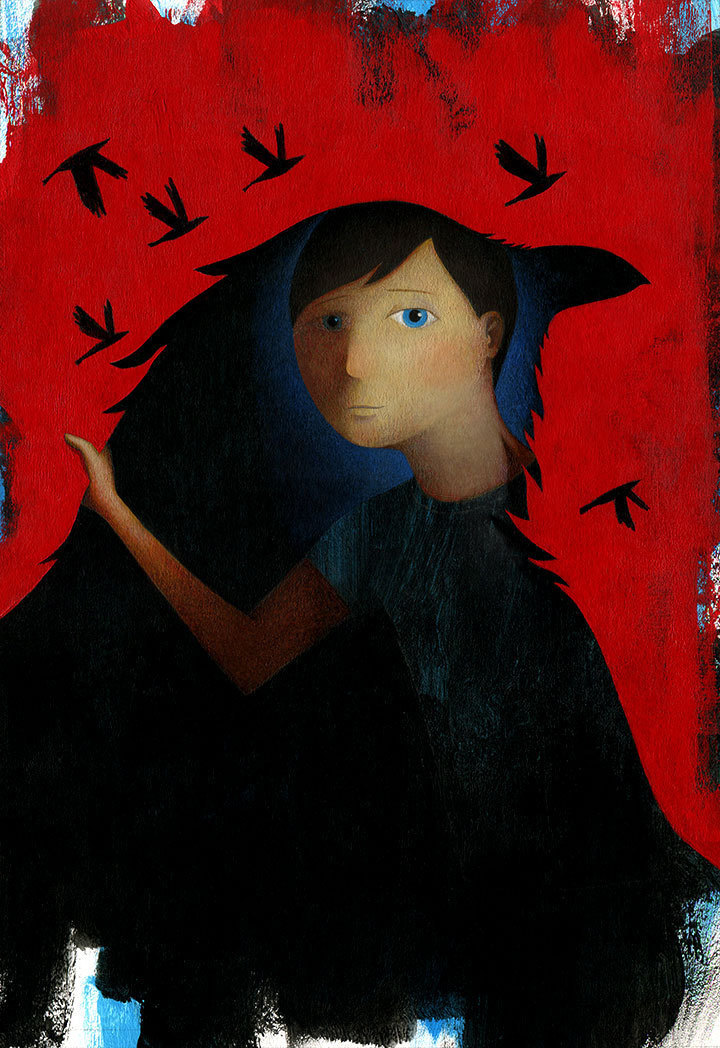 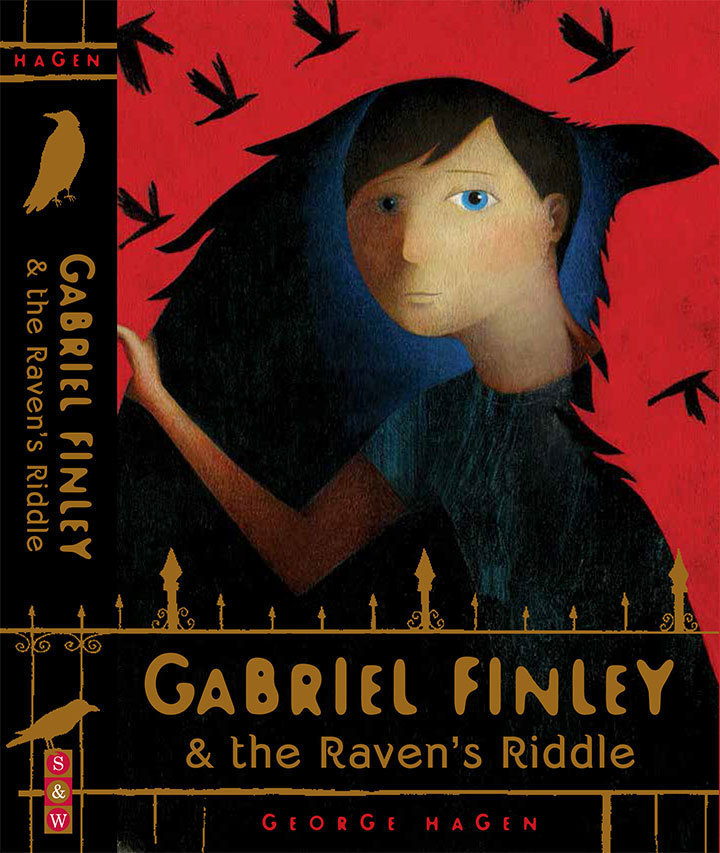 I was incredibly excited for this book. I propped up the painting on the other side of my studio to occasionally look at it as I was working on other projects. As weeks went by, looking at the painting regularly, a discomfort started to grow. I am very self critical, so I know that after a job is completed by the deadline, I need to put it away in storage and not look at it. With the painting staring at me daily, I came to the conclusion that I could do a better job. I wanted to give Gabriel a more ‘human boy’ look rather than the caricature that I initially created.

I have re-done paintings plenty of times in the past when I didn’t like them but in this case, it was already approved and ready to go. I decided I needed to re-paint it. Below is the original version of the second painting.

Months later, when Rachael got back to me to bring the project back to life, I was told all the neat ‘special effects’ were going to be added to the book I described above as well as adding three interior illustrations. I was excited! In the conversation about the other new parts of the project, I told Rachael about the new painting. To shorten how it all happened, Rachael and the publisher loved the new version and decided they would go with that instead!

There was a bit of change – if you look at the original cover, the team liked the texture and lighting of Gabriel’s shirt and head but wanted the new face I painted with the qualities of the older painting. Not uncommon in some of my work, I took both paintings and digitally combined them to make what ended up being the final cover. 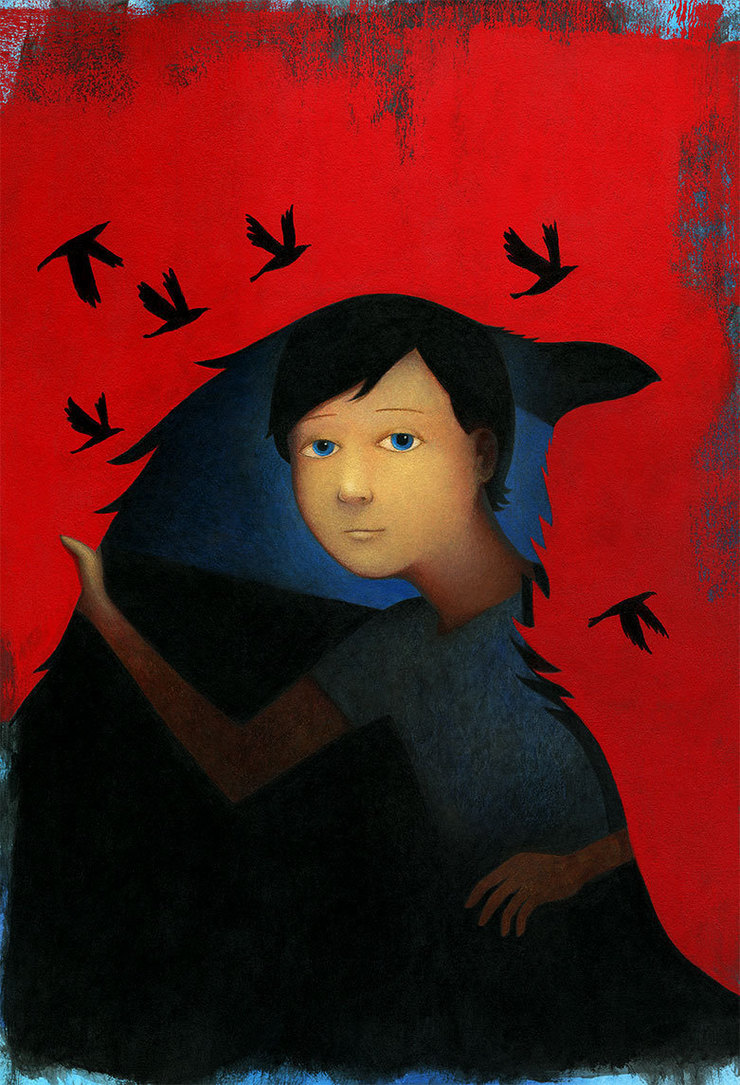 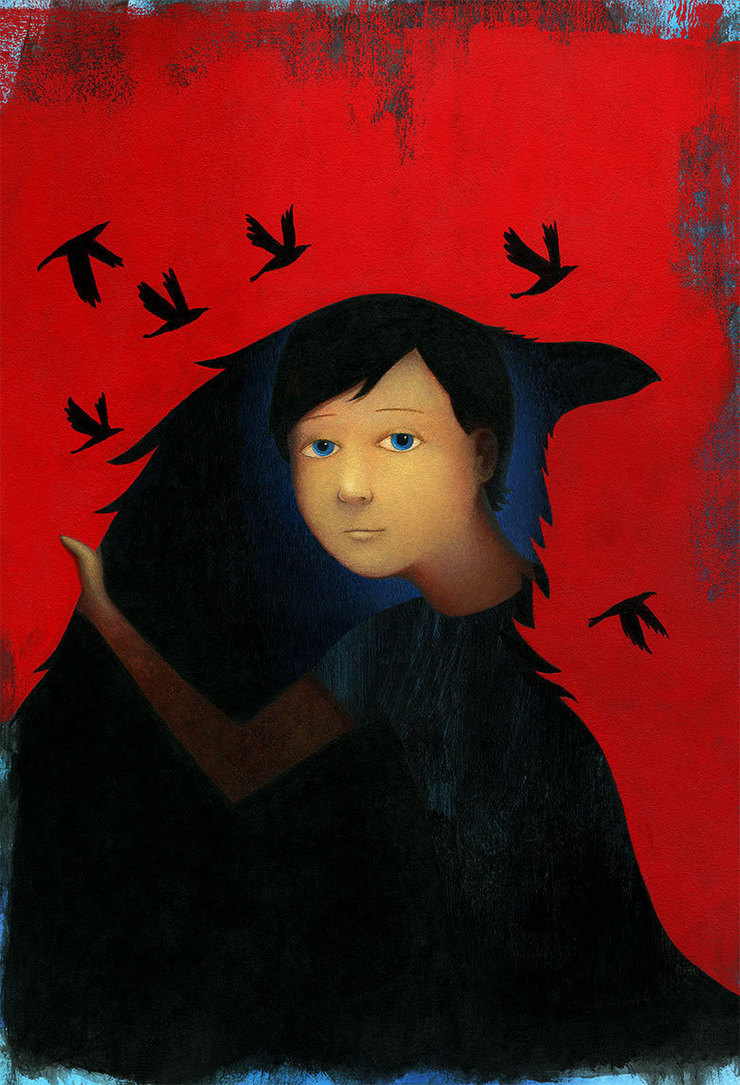 Gabriel Finley and the Raven’s Riddle was an amazing project to work on and I was honored to be part of the project. It’s been a dream to create art for the wonderful George Hagen’s story. I could never have gotten through this project and have such joy doing it without the wonderful guidance of an incredible art director, Rachael Cole. Thank you, Rachael.

I hope you go and give this book a read!